Who's working in the ARC lab

Our research focuses on creating algorithms that allow robots to interact with the world. These general-purpose motion planning, machine learning, and manipulation algorithms can be applied to robots that work in homes, factories, and operating rooms. We are interested in all aspects of algorithm development; including creating efficient algorithms, proving their theoretical properties, validating them on real-world robots and problems, integrating them with sensing and higher-level reasoning, and distributing them to open-source communities. Our lab draws on ideas in search, optimization, machine learning, motion planning, control theory, and topology to develop these algorithms and to prove their properties. We also seek to develop algorithms which can generalize to many types of practical tasks and application areas.

Bridging Learning and Motion Planning
Learning algorithms are good at quickly producing solutions to problems that have been encountered before, but they have difficulty generalizing to new situations. Planning algorithms are good at generalizing to new situations but at significant (and sometimes prohibitive) computational cost. This project seeks to combine the best of both approaches.
Expand

This project investigates methods to track deformable objects despite partial (self-)occlusions. Our methods are based on Coherent Point Drift (CPD) and use RGBD data to reason about the location of the deformable object in 3D. A key ability is ensuring that the tracking estimate complies with the geometric constraints of the object and environment.


Humanoid Locomotion Planning
We are creating algorithms that allow humanoids to locomote through difficult environments such as ships or disaster sites while subject to disturbances.
Expand

Constrained Manipulation Planning
Our everyday lives are full of tasks that constrain our movement. Carrying a coffee mug, lifting a heavy object, or sliding a milk jug out of a refrigerator are examples of tasks that involve constraints imposed on our bodies as well as on the manipulated objects. Creating algorithms for general-purpose robots to perform these kinds of tasks also involves computing motions that are subject to multiple simultaneous task constraints.
Expand
Overview

An implementation of the above framework as the open-source Constrained Manipulation Planning Suite. 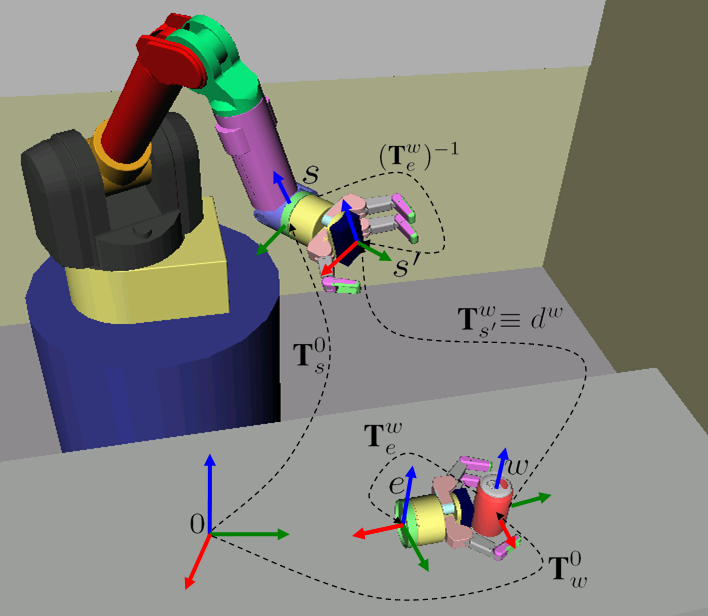 Some of the most common constraints in manipulation planning are constraints on the pose of a robot's end-effector.  They arise in tasks such as reaching to grasp an object, carrying a cup of coffee, or opening a door. These constraints can act on the entire path, such as not spilling a cup of coffee, and/or on the goal of a path, such as reaching to grasp an object. In general a set of constraints for a manipulator's end-effector can consist of an arbitrary number of poses spread in an arbitrary way throughout the task space. However, such a broad representation lacks three fundamental properties that are necessary for sampling-based planning:

TSRs describe end-effector pose constraints as volumes in SE(3), the space of rigid spatial transformations. These volumes are particularly useful for manipulation tasks such as reaching to grasp an object, manipulating an object with pose constraints, such as a glass of water, or placing an object onto a surface, such as table. TSRs are intuitive to specify, they can be efficiently sampled, and the distance to a TSR can be evaluated very quickly, making them ideal for sampling-based planners such as CBiRRT. 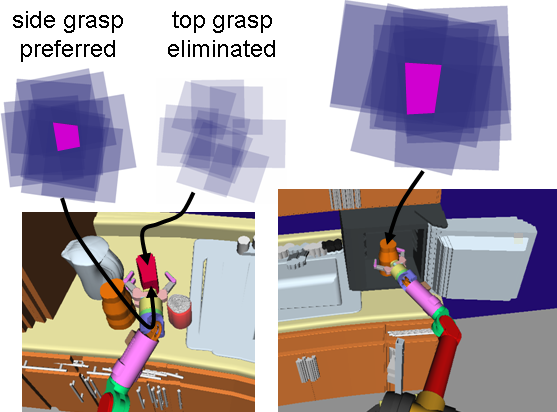 A common assumption when planning for robotic manipulation tasks is that the robot has perfect knowledge of the geometry and pose of objects in the environment. For a robot operating in a home environment it may be reasonable to have geometric models of the objects the robot manipulates frequently and/or the robot's work area. However, these objects and the robot frequently move around the environment, introducing uncertainty into the pose of the objects relative to the robot. Laser-scanners, cameras, and sonar sensors can all be used to help resolve the poses of objects in the environment, but these sensors are never perfect and usually localize the objects to be within some hypothetical probability distribution of pose estimates. If this set of probable poses is large, planning with the best hypothesis alone can be unreliable because the robot may fail to complete the task and unsafe because the robot could collide with a poorly-localized object.

Since we would like to compute a plan that is guaranteed to meet task specifications for all hypotheses of object pose, we must modify the TSRs of a given task to account for pose uncertainty and introduce virtual obstacles into the simulation to avoid potential collisions. We start by duplicating the TSRs for each pose hypothesis and computing the intersection of all duplicates. We can then sample from the 6-dimensional polytope of intersection to obtain poses that are guaranteed to obey task constraints despite pose uncertainty. A key advantage of this approach is that if the pose uncertainty is too great to accomplish a certain task, we can quickly reject that task without invoking a planner. This approach can also eliminate grasping strategies which are not robust to uncertainty. 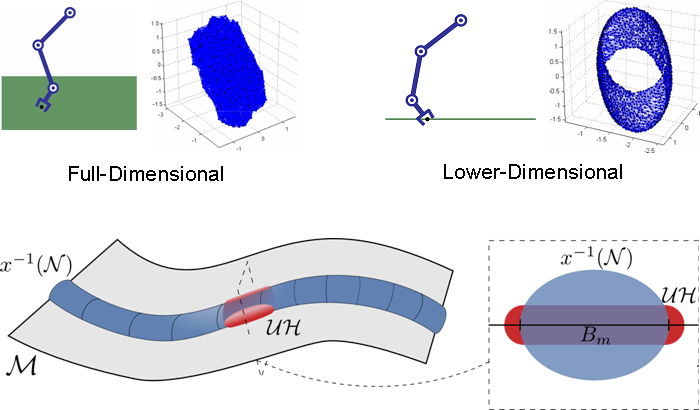 We were the first to present a proof for the probabilistic completeness of RRT-based algorithms when planning with constraints on end-effector pose. If the manifold of valid configurations corresponding to the pose constraint has non-zero measure in the C-space, it is straightforward to show that algorithms like CBiRRT are probabilistically complete. This is because random sampling in the C-space will eventually place samples inside of the manifold.


Base Placement for Mobile Manipulators 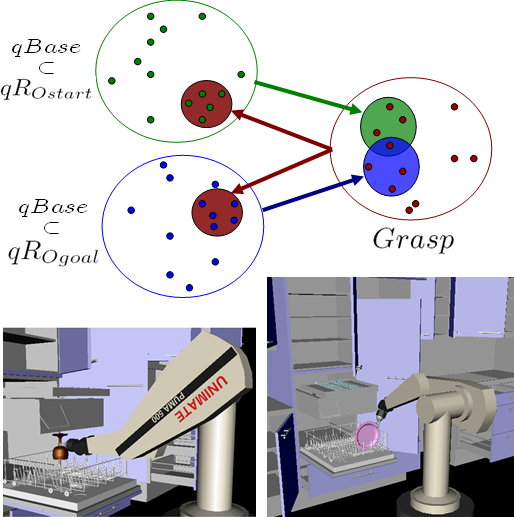 Path planning for a mobile manipulator involves multiple levels of planning which are often divided into sub-problems to manage complexity. For a pick-and place operation the break-down might be: 1) move the robot to a configuration near the object, 2) grasp the object, 3) move the robot (holding the object) to some configuration which places the object into its goal configuration. Breaking the problem into the above sub-problems reduces the complexity of the overall task by allowing sub-plans to be generated in series. However, ignoring the coupling between sub-problems can turn feasible problems into infeasible ones and introduce unnecessary difficulty for the path planning algorithm.  We show how to couple sub-problems through choosing optimal grasps and base placements for transition configurations, i.e. configurations where the robot first grasps or releases the object. We find optimal configurations (in terms of grasp quality, manipulability, and clutter) by searching a constrained space of base placements and grasps using a co-evolutionary algorithm. This algorithm significantly out-performs random sampling and is able to generate high-quality configurations in extremely cluttered environments.

Grasping in Cluttered Environments
The goal of a grasping algorithm is to find a pose and configuration of a robot's hand which grasps a given object in a desirable way. Our research in grasping has focused on extracting information about an object's environment to make decisions about how that object should be grasped.
Expand

The goal of a grasping algorithm is to find a pose and configuration of a  robot's hand which grasps a given object in a desirable way. Development of grasp quality metrics, such as force-closure, has been intensely studied in robotics for many years; however these metrics neglect a key component of grasp selection: an object's environment. Our research in grasping has focused on extracting information about an object's environment to make decisions about how that object should be grasped. Considering the object's environment allows the robot to quickly eliminate hand poses that place the hand in areas where there are obstacles and to focus on areas where the hand is collision-free and where the fingers make good contact with the object. Our grasping algorithms are able to find grasps in environments where state-of-the-art algorithms cannot, while requiring only several seconds of computation. We have also extended these algorithms to consider two-handed grasps with similar results.

A kinematics library that uses PyTorch to compute forward kinematics for multiple configurations in parallel. The computation is differentiable and the library loads robot descriptions from the URDF, SDF, and MJCF formats.

The latest version of our deformable object tracker, CDCPD2, is now available here:

The original CDCPD is an implementation of

This library includes object-oriented API for tracker, visualization utilities and a ROS node that subscribes and publishes PointCloud2.

Given an environment specified as a set of polygonal surface and a robot model, the code generates contact sequences for a humanoid robot using both arms and legs. We provide an example with the Escher humanoid robot model. The code is written in Python 2.7 and tested in Ubuntu 14.04 with ROS Indigo

Visit our Github page to get the latest code developed in the lab. Watch out, it's a jungle in there!

The Datalink Toolkit is a ROS package designed for remote operation of a robot over a high-latency and low-bandwidth datalink. The package allows the user to easily set up relays and compression methods for a single-master system. These relays avoid duplicating data sent over the datalink while compressing common datatypes (i.e. point-clouds and images) to minimize bandwidth usage. The package was developed and extensively tested as part of the DARPA robotics challenge, though it is not specific to a type of robot.

The package allows the user to easily set up relays and compression methods for a single-master system. These relays avoid duplicating data sent over the datalink while compressing common datatypes (i.e. point-clouds and images) to minimize bandwidth usage.

The toolkit includes both message-based and service-based relays so that data can be sent on-demand or at a specified frequency. The service-based relays are more robust in low-bandwidth conditions, guaranteeing the synchronization of camera images and camera info messages, and allow more reconfiguration while running.

The key features of the package are:

Get the package from our git repository.

CoMPS is implemented in C++ and compiles in linux only. There are also several examples in python and matlab that show how to interface with openrave to use the plugins in CoMPS.

This package is available on SourceForge.
LightningROS
LightningROS is a ROS package implementing the Lightning Path Planning Framework. This approach uses a path library to store previous experience while allowing generality by also planning from scratch.
Expand

LightningROS is a ROS package implementing the Lightning Path Planning Framework. This approach uses a path library to store previous experience while allowing generality by also planning from scratch. Please see this paper for more details.

This package uses OMPL planners to implement each component in Lightning and can be called the same way as any other OMPL planner.

This package is available for ROS Feurte here. For later versions of ROS, see here.